Three Tips that Saved Me $1920 On My Cell Phone

How To Save Money When Buying New Cell Phones

I got up and looked at my phone. It didn’t charge the night before. I was so angry that my phone wasn’t working as planned. I had a million things to do, and I needed my phone. I went to the store only to find out the phone I had just paid off in full had an issue that was of course not under warranty. That is the story of my life. I had two options one pay $149 to fix the phone or two, buy a new phone.

I have new cell phone envy issues, so I went with that option. I needed the newest phone which happened to be a Samsung 8.  I did attempt to use my husband’s iPhone for a couple of weeks until the Samsung 8 was out and frankly, I hated it.

I went to my carrier for cell service. I could go anywhere since I owned my other smart phone and I wasn’t under contract. I thought they had a great deal. You turn in your old phone and then pay $15 a month for 24 months for a new phone. That sounds great if you can’t do math because there is a caveat. You need to have the unlimited plan on your account. 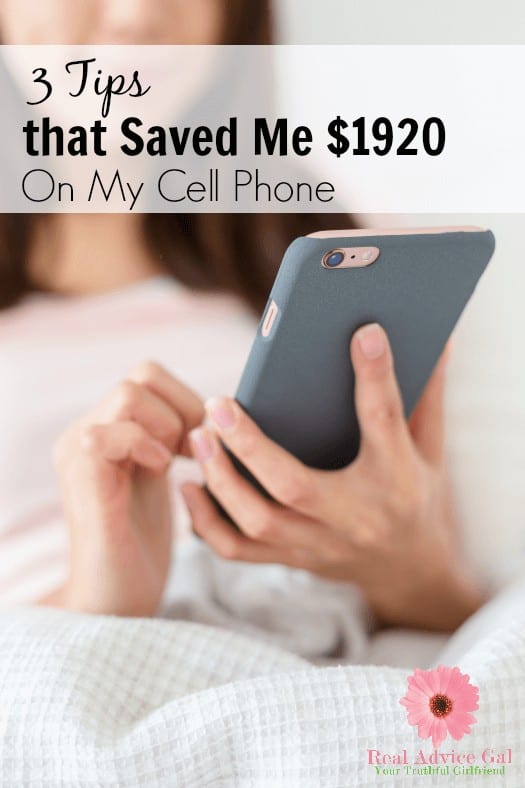 How To Save Money When Buying New Cell Phones

Phone turn in $360 over two years (this is important)

$360 in payments for the phone in two years.

This is where they make money on you. Get you, it is on the plan you have to have. I had to have unlimited service. I was only using 4gb on two phones. When I went to unlimited, my rate jumped from $108 a month with taxes and insurance to almost $180 with insurance on my new phone, phone payment, and the unlimited plan not on one phone but both.

What happens is they get you on the plan you have to have. I had to have unlimited service. I was only using 4gb on two phones. When I went to unlimited my rate jumped from $108 a month with taxes and insurance to almost $180 with insurance on my new phone, phone payment, and the unlimited plan not on one phone but both. I could not separate the two phones. All the phones had to be on the new rate plan.

So you can see that $90 extra a month x 24 months= $1,920 in charges for two years for more service than I use. That is if I only keep my phone for two years without replacement. Yikes! This number could increase the longer I owned the phones.

How did I save money on the Samsung 8 phone?

This is what I did. I paid off my phone at $720. I did not sell back my old phone to the carrier they only offered me $129 and if I sold it back to them without using their double your rate plan.  I used the site decluttr, and they paid me $360 the deal is not on any longer. This way I still got my phone for what the carrier for the same amount without changing my service contract since they agreed to pay $15 a month for my phone if I kept their unlimited rate plan.

Tips to Save Money On A Cell Phone

This is an additional tip, buy the older phone if you do not need the newest one. That will save you money. I also suggest figuring out the real costs of that new phone. I am in the position that I can write off my cell, and I need a phone for work. I get paid to take pictures, record videos, and do social media from my phone so I need the best on the market for my industry.

I was also given another great tip to save money on a cell phone rate plan. If you get an alert when you are about to go over on data it is better to change your plan for the month to the higher one since the additional minutes carry over to the next month. I asked about buying an extra GB if I was about to go over. I was told not to do that changing the plan is much cheaper and you get the extra minutes as a carrier over.

I would suggest looking over what you intend to do, rate options, phone costs, and cost over time before you make a huge mistake. I always suggest not buying something you can’t afford to pay for in full. That is how we are able to successfully live life to the fullest without debt.

How do you save money on a new cell phone?

How To Explain Being Frugal To Your Kids

Cleaning Your Closet The Trend You Need To Try

Frugal Living Tips You Need When You Grocery Shop

The Meal Plans You Need

Debt Advice You Can’t Live Without