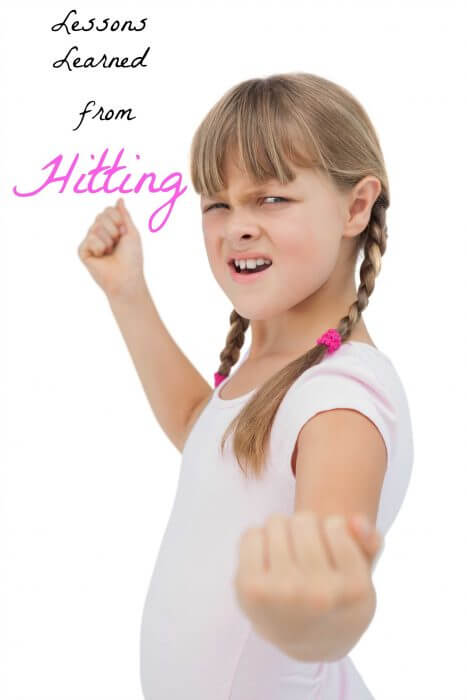 I recently posted something that happened in my family on my facebook page with an inquiry on do you believe in “tough love”? The conversation was quite lively and some people do not follow my rule for interacting on my page which is to attack the issue not the person. I did contact those individuals and asked them to apologize. I believe disagreement is perfectly acceptable but name calling and personal attacks are not. That is most likely because I understand to live in society there are underlying rules that must be adhered to in order to protect everyone. One of the rules I firmly believe is that violence begets violence. I strongly feel that my child does not have the right to hit and it is my job to make sure that my child does not hit anyone or anything.

This is what happened: You can read the whole transpired conversation on our Real Advice Gal facebook page  <— if you would like. This was the statement I posted:

“So last night I removed my youngest from the family after two hours of naughty behavior. I made him sleep on the couch and he wasn’t allowed in any room that the rest of us were in. (We are currently in a hotel room with a kitchenette and one bedroom and a bathroom so I could see him) When he talked to me I ignored him. This morning he told me he would follow my rules which included using hands for helping, speaking kindness, and doing what I asked by the second time (growth opportunity). Do you also believe in tough love?
This is a great post written by Karla who is a writer on our team.https://madamedeals.com/karlas-korner-ten-lessons-i-learned…/ ”

These are some of the comments that had me floored and even angry:

“My child is not permitted to hit either, and I’d like her to listen to me but the fact is she is 4 years old and sometimes she doesn’t want to listen, maybe because she’s feeling sassy and maybe because she’s “too busy” doing kid things. I can’t punish her for that because as a 26 year old woman sometimes i don’t want to listen to her or my husband or my friend, etc. It is her right to not listen if she doesn’t want to. She is a human being as much as anyone else. You earn respect by giving respect. And it certainly isn’t respectful of you to be so mean to someone who trusts you so implicitly. You are damaging your child by making him feel so small and unwanted. That is not “tough love” as you so affectionately call it, it’s bullying. Sounds like you need to grow up and give your little one a much needed hug.”

If you do not discipline your child for hitting then you have taught them that:

1) Hitting works (They can get what they want if they hit.)

2) Hitting is an appropriate way to resolve issues

3) The rights of others are not as important as theirs (My other children were abused when my son hit them so if I allowed it to continue because my child felt “the need” to do it then I was permitting the abuse of the other children.)

4) Violence is a strategy . (I believe in peaceful resolutions and violence is an absolute last resort.)

If you do not correct this behavior you have failed your child.

I was told because I isolated my child that:

“What you did falls under abuse guidelines for CPS. It’s neglectful and mean spirited and quite frankly very childish. You are the grown up and you are acting like a two year old. I feel sorry for your child that he doesn’t have a mother that shows love in her discipline. Disgusting.”

My response is simple. Love is shown by teaching your child how to act so they can not only function in society but thrive. I removed my child from the group because he didn’t want to stop hitting. That is a logical consequence. If you can’t follow the rules you are removed. That is why there is something called jail. It is for people who can’t follow the rules of society. I did not endanger my child by placing him on the couch to sleep. I most likely protected him because if he hit his older brother one more time then I am sure my oldest would have hit him back. You can only take being hit so many times before you will strike back. I also protected him by teaching him that hitting isn’t acceptable. I taught him violence does not work. If more people taught their children violence didn’t work we would have less people in jail. When I mentioned tough love it was in reference to ignoring his pleas to sleep with his brother. He lost that chance and once it was gone it was gone. He could cry away that wasn’t going to change anything. I am very clear with my children in regards to expected behaviors. I use phrases like if you want this then this needs to happen.

“There are appropriate ways to seek attention and inappropriate ways to do it. By ignoring or removing at the time of the inappropriate behavior you reinforce that this action is unacceptable. Once the child’s complies, then you can re-engage with the child thus showing them that proper behavior can help them accomplish their goals. As parents we often miss many of the early signs that our children need something and they act out as a consequence. Our responsibility as parents is to mold them and shape them in a way that will show them we love them, care for them, and will be there for them while also teaching them that tantrums and other inappropriate behavior is an unacceptable way to conduct oneself.”

The other thing I would like to note and challenge is that the people who had the most issues with my resolution to my child’s hitting problem were the most aggressive toward others on the page. I am not sure why that was. They felt the need to personally attack people. I can only surmise that they felt their ideas were more important and more justified then the opinions of others. They felt that the way to be heard was to lead with “violence” not physical but verbal violence. I deleted name calling posts and I had to deal with several readers that direct messaged me because they were upset with the response of some of the readers on their posts. I understand the need for diversity in opinions. I like to be challenged, taught, and introduced to new ways of thinking but there is a way to do so where you are acknowledging the opinions of others. I see that being kind and loving toward your child is important but in my house a hit doesn’t not deserve a kiss and a hug. It deserves a why did you do that? What should you do instead? If you do it again then this will happen. If they do it again then they are met with discipline.

Also as a note I hold a Master’s Degree in Education. I have completed  training in Kingian non- violence , Ruth Charney Teaching Children to Care , Lee Canter’s Assertive Discipline program, Non Violence Restraints, and I have attend classes in ABA.  I used to teach in the hardest classroom by choice and was able to turn around several children that had major behavior challenges by presenting clear rules and clear consequences. (This statement is a fact I have run into several of my students over the years who have told me that what they learned in my class put them on the right path. The classroom I used to teach in were Special Education so I firmly believe each child has the ability to learn at their level appropriate behaviors for society. The strategies, implementation, and work involved to teach these skills will differ but it is not only possible it is probable with clear and consistent strategies)

Before we move on to a whole new topic discipline isn’t punishment please read up on the difference prior to making comments on this post. You can read this it will help. Why Discipline isn’t Punishment. I do hope the parents that consider hugging their child when they hit will come over a little more to my way of thinking because hitting should not be rewarded with hugs and kisses.

Things you should never say

Your Kid is Obese and it is Your Fault

Karla’s Korner – My Girl: A Lesson in Inner Strength

10 Things My Daughter Taught Me

Stop Being a Wimp Learn How to Say NO