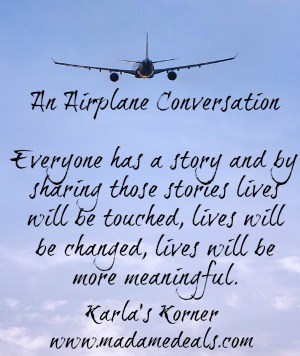 As I stumbled through the crowded airplane aisle trying to stuff my carry-on in the overhead compartment I spied my seat; 17B. It was there that I realized I was going to spend the next two hours sandwiched in between two strangers; one a young unshaven man with ear buds jammed in his ears and the other an older gentleman with white hair and a somber look upon his face. Tired, hungry and ready to be reunited with my husband and children I settled in for what I thought was going to be an uncomfortable trip.

With the raindrops pounding against the airplane window it was obvious that this novice traveler was a bit nervous and apprehensive about the last leg of the journey. Breaking the silence the older gentleman spoke softly asking if everything was okay; “Just nervous” I replied “I’ve only flown a few times and I’ve never travelled alone”. He assured me that all would be fine as the plane began to back away from the terminal. As we began to taxi down the runway he spoke again, this time with a quiver in his voice he shared with me that he had just spent the past five days watching his mother pass away; his heart was broken. His name was John.

Sitting next to this stranger listening as he recalled stories of his mother, her strong will, love of nice things, and slightly manipulative ways it was apparent that there is a definite hole in the lives of those who loved her. With his words flowing freely stopping periodically to hold back emotions as he stared at the cloud filled sky through the plane window I realized that my own anxieties seemed at that point irrelevant. Providing a listening ear my seat neighbor talked through the stories of his mother, his father, brother and a past filled with memories of beach vacations, antique furniture, happiness and hardship. Moving on to stories of his own family, his array of exotic birds who talk to him in perfect English, a wife who was waiting to pick him up at the airport and a newly planned river front cottage our time together came to an end on the runway of the Richmond International Airport. John thanked me for a listening ear noting that our conversation allowed his mind to wander from his grief for a while and relive some pretty special memories. He handed me my bag from the overhead compartment walked off the plane, looked over his shoulder wished me a safe trip home and disappeared into the sea of fellow travelers darting through the airport. I watched as he faded into the distance whispering a prayer of peace and comfort knowing that his days ahead would be difficult. His new normal without his mother will take getting used to. His story touched my heart. It made a difference to me; it was apparent that my listening made a difference to him.

As I crawled into the waiting limo that would take me on my hour long trip home, the sun was beginning to set in the distance like a giant fireball slowing beginning to fade. I will never see John again, but the imprint he made on my life will remain. What started out as an uncomfortable situation ended up being a reminder of the frailness of life, the certainty of change and the reality that we need the human connection. Allowing ourselves to connect with others whether in a deep personal friendship or in a brief encounter with a stranger, it is important to connect. Everyone has a story and by sharing those stories lives will be touched, lives will be changed, lives will be more meaningful.

I encourage you to be aware of those around you. Listen to their stories; it’s not always about our own story that needs to be shared. Be aware. Be available. Be attentive. You never know when your presence will make a difference in someone else’s life; just like that of mine and John’s. 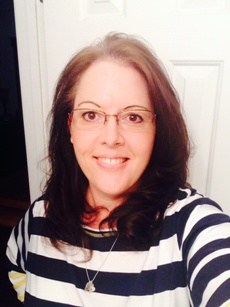 I am proud to introduce a new column to Madame Deals! I think we all need a touch point a place we can go to be inspired. Karla is my children’s teacher, a good friend, and a person with a heart of gold. I hope that her words will inspire you to do more. We are only as good as the people we surround ourselves with. It is important to listen with your heart and proceed with your eyes open. Enjoy!

Related articles across the web

Karla’s Korner: The Roots of Life

Karla’s Korner: Finding Ourselves in the Quiet

Karla’s Korner – JUMP: Being The Best You Possible

Karla’s Korner: On Being Different