I knew it was happening. I gave birth to him after all. I am not sure if I was more anxious about giving birth or celebrating his birthday. You see as my son has gotten older in my own mind I have gotten cooler in his but that isn’t the case. I have come up with really fun birthday party ideas over the years but this year I was stumped.

What 15-year-old boy birthday party ideas could I come up with? I wanted to be at the party but I didn’t want to cramp his style. I had a couple of things in mind. The first was to make it memorable. The second thing was it needed to be safe. The third thing and most importantly it had to reflect what he was into not what I wanted. I totally tried to push cake, pizza, and ice cream at home. That was met with “Mom, I am not turning five.”

I knew I needed a party with fun, excitement, and plenty of food. That is how we ended up partnering with Kings Dominion for the perfect Fun Birthday Ideas For Teen Boys. I have worked with them over the years and each time we go there we make unforgettable memories. My teen son rode his first roller coaster there with me by his side. He ate his first chicken and waffles there with my fork also not far behind. He went on his first drop water slide, cruised his first lazy river, and we took on Delirium together. I knew that King Dominion would not only be the perfect place to have a party because of the memories I have created with him there but I knew his friends would be over the moon to attend.

This year we attended their Halloween Haunt and it was Ghoul time. We invited 4 friends and they had a blast. Here are 3 tips to make sure your Kings Dominion experience is more fun for everyone!

1 Get a Fast Lane Pass – They went on roller coasters multiple times with the fast lane pass. It was so worth it! They also had access to the Fright Lane that guaranteed front-of-the-line access to mazes. With it they could go in several of the haunted attractions with no wait! Also, an incredible value. There may have been some friends that were too spooked to continue and some friends that borrowed their pass and went again. I am not naming names but they were so good it was frightening.

2 Get the All Day Dining Plan – The ultimate luxury is the all-day meal plan. Get this deal for under $30 you can eat at several participating restaurants every 90 minutes. Can you say teen boy mom’s dream? The drinks weren’t included so we bought those refillable drink cups. We had everything from BBQ to build your own Mac and Cheese and of course Pizza.

3 My last tip is to get a locker near the rides – This is a great idea so they can leave their phones, sweatshirts, etc without having to worry about losing them. 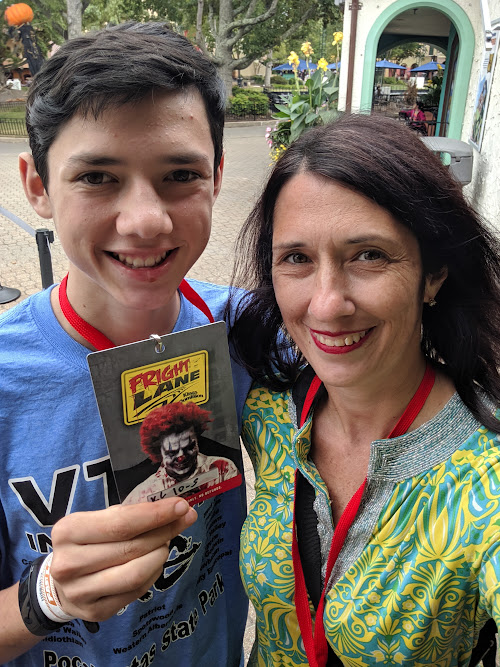 You will also need to make sure you had a nap because they will have such a howling good time that they keep you there until the park closes in my case midnight. The celebration was incredible and I am sure this teen boy birthday party idea will be a winner with your teen as well.

Her Royal Highness, the evil Queen Majesty, has decided to throw a ball like none other as she lays claim to the lands of the living and the dead. In what is bound to be the most prestigious ball ever thrown, Majesty is out to prove once and for all that every person and demon will eagerly follow her plan for domination. Part party, part scare zone, guests are invited to mix and mingle with the height of the undead high society and those 21 and older can dare to try the specialty cocktails. Be sure to grab a selfie with the Duke and Duchess, but beware; sometimes the mask is there for a reason.

In the last years of the Revolution, Peter Armstrong was a pumpkin farmer living off a winding road in the quaint woods of Virginia. Some say the spirit of a dead soldier possessed him and in an act of rage he murdered his wife with a bayonet. He hid her body inside one of his largest pumpkins, leaving her there to rot. Soon after he started seeing apparitions of his wife with the face of a jack-o-lantern. His rage not subsided, Peter went on to murder other victims, burying them all in the patch. The evil spirit in his body began to morph him into a pumpkin like creature. His victims too, began to rise and now haunt these once tranquil woods with their jack-o-lantern faces.

A new reign of terror is here, and the overthrow of the dark beings has begun – Queen Majesty has grown tired of the antics of her minion, Overlord, and has vowed to bring hellfire down upon his followers. This opening SCAREremony will take place every night of Halloween Haunt at 7p.m.

Join Queen Majesty and her Royal Court as they behead, one by one, the most loyal of Overlord’s subjects. Sometimes the executions do not go quite as planned, but they always end in a raucous musical celebration as her court of singers and dancers Put a Spell on You in this grand Ballroom Blitz. When the clock strikes midnight, the Overlord will finally meet his fate as Majesty makes one final cut in what is sure to be The Greatest Show.

The Great Pumpkin Fest and Halloween Haunt are both included with park admission. You can also get unlimited admission and free parking to Kings Dominion the rest of 2019 and all of 2020, including Halloween Haunt, when you purchase a 2020 Gold Season Pass.

How to Save Money Gardening

Take the Pledge and Be a Mental Health Advocate #OnOurSleeves

Ways to Teach Kids on How to Save Money