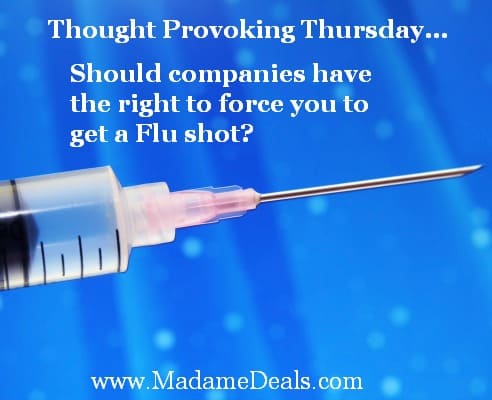 Should companies have the right to force you to get a flu shot?

*The original story for this post can be found HERE, all information has come from WFTV.com

Today on Thought Provoking Thursday I wanted to see what your opinion was on company rules, and how far their rights go when it comes to what they expect from their employees. I was checking out the recent articles on Abcnews.com and stumbled across an article I thought was kind of strange, A Florida man was fired from his job after refusing to get the new company requirement, a flu shot. Are Flu Shots Necessary?

First off, I have nothing against flu shots per say, I personally can’t get one because I am allergic to one of the ingredients.  I also don’t take my child to get her flu shot either. She has also never had antibiotics. This is because I want to make sure she builds a healthy immune system early in life, and doesn’t end up with a compromised immune system like I have. With that being said, if I (and her doctor) truly thought she was in need of antibiotics, I would absolutely give them to her.  So it makes me wonder, would I be exempt from a rule forcing employee’s to get flu shots?

Here is the story of a Personal Trainer who lost his job over refusing to get a flu shot:

Dave Stillwagon, a certified personal trainer, lost his job at one of Health First’s Pro-Health & Fitness Centers because he simply did not want to get a flu shot. His company has recently made it a requirement for it’s over 7,000 employees to get a flu shot by December 15,2013. 98% of those employees complied and those that didn’t were out of a job.

“I don’t drink, I don’t smoke, I don’t take drugs by choice. I also make the choice that you can’t force drugs into me,” Stillwagon said. He also stated another big reason he didn’t want to get a flu shot is because there is not enough research regarding the long term effects of the shot, and he thinks that the company being a health and fitness company should focus on natural ways to prevent sickness.

So what are my thoughts on this, Are Flu Shots Necessary?

I don’t think a company should be able to force someone to get a flu shot. It makes me wonder if he would have claimed religious reasons for not wanting to get the shot, if he would have been pardoned.  But, (there is always a but) working in the health care field, I was required to get a HepB shot, which I did with no problem. If this was an article about someone working in a hospital, or a daycare, I might think differently, because passing the Flu in that type of environment could be deadly.

You can read the entire story HERE.

Looking for more thought provoking posts? Have you seen the cheerios commercial controversy?

Didn’t get a flu shot and caught the flu? Here are some natural ways to get rid of it!

Are Flu Shots Necessary? Share your thoughts about this topic below.